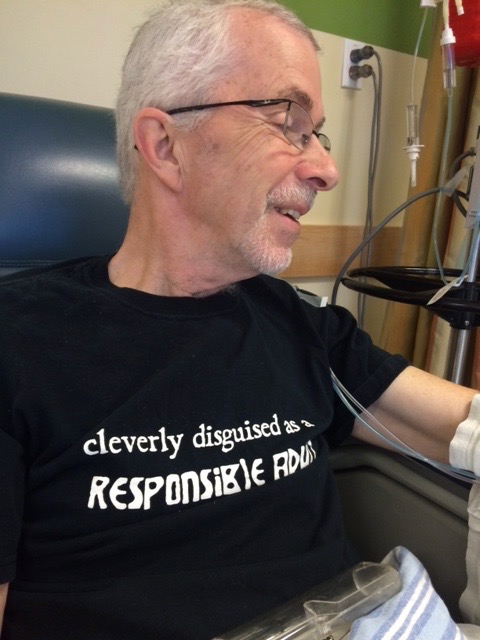 Ray would like to let you know that his sixty-six-year pilgrimage finished with excellence. He received his final call, an offer he couldn’t refuse, for an appointment from which he will not be returning, but one that he has been anticipating since he met Jesus 37 years ago. This assignment comes with a huge sign-on bonus, including a reunion with family and friends he has not seen in a long time. He was especially hopeful that he would be reunited with his dad, who died when he was eight. Future security is locked in.

Even in those final days, he reminded family and friends that while we are still here, we cannot yet see things clearly. We’re squinting in a fog, peering through a mist. But for Ray, the weather has now cleared, and he can see all things clearly. Music, laughter and love are guaranteed in this place of residence.

Ray left detailed instructions for his family and friends to choose that Ancient Path to follow Jesus, and he is looking forward to us joining him on the other side. This son, father, grandfather, brother, brother-in-law, uncle, friend, neighbour, colleague, board member, plumber, gas-fitter, university-educated pilgrim knew that his hunger for life-long friendships, meaning and learning was part of the adventure. He often quoted from the book Heaven by Randy Alcorn that said,

Ray’s final hope and prayer was that all that he knew here would believe what he believed and experience for themselves a Joyful Journey and eventually join him there. The entire Olafsen family is so grateful for the outpouring of love, encouragement, and prayer over the past several years, especially this past week.

And to everyone whose life intersected with Ray, for those that invested by loving, leading, working alongside, or being a friend at any point along the way, please know that Ray valued all of you!

The last word is Ray’s: “Everything is under control.”

Ray lived a generous life. He loved well and was well-loved. Thanks to Jesus, he crossed the threshold from earth to heaven with “no regrets & no fear” at precisely 6:48 pm, Monday, October 23rd.

A close friend best described Ray’s departure as “A Beautiful Death.” Ray’s life has left a forever imprint on the hearts of his wife of 41 years, Doris; his son Travis (Kate) and grands Jay, Josh, Liam, Keziah & Livia; his daughter, Jesse (David); his mother-in-law, Lillian Scott; sister, Vicki (Peter); his niece Jolene (Dez) and their children, Ashley, Riley, Alyssa; his nephew Josh (Lacey) and their children, Nova and Hudson. Ray was predeceased by his niece Rachelle, but he delighted in her children Jeremy & Cori-Lynn. Rays love for family extended to several special cousins, including Joan, Ron, Eric, Jillian, Amber, and the list continues including Jim, who predeceased him. Also grieving Ray’s passing is his 4-legged buddy, Chester.

Ray served in the gas safety industry for 30 years, and he had high regard for his colleagues and the trades served by the Gas Safety Authority. He also had a deep affection for his home group

and the entire community at SouthRidge Fellowship and all of his neighbours in Summerhill Gate. Ray loved serving as a Director on the Wellspring Foundation Board, and he was humbled to be one of the founding Board members for the Investing Hope Foundation in Colombia. A highlight of his life was when this plumber/gasfitter returned to school at age 50 and graduated with his MA (Honors) in Leadership from Trinity Western University. Ray called Langley home for the past 17 years, and he intentionally took time to make friends in his local neighbourhood and throughout The Langleys.

The Olafsen family is thankful for his medical team’s amazing care – Drs. Anwar Kahn, Ahmad Ashrafi, Fred Hsu, Ann Tan and the entire Cancer Care Team at the Abbotsford Cancer Centre. The family will be forever grateful for Fraser Health Hospice nurses’ loving hospice care nurses Susan, Priscilla, Marsela and Christian and Dr. Dunkin. Ray was also deeply moved and grateful for the encouragement that he received from all that followed his cancer journey on the CaringBridge blog.